The gravity amplifiers themselves are three tubes about two feet in diameter and four feet long.  They are arranged in a triangular configuration below a false floor and above the bottom of the craft.  The reactor is centered between the three amplifiers because the wave is also present at the bottom of the reactor.  The reactor acts as a transmitter, similar to a Tesla Coil, in that it produces its own gravitational wave, and, depending on how the amplifiers are oriented, gravity waves can be focused on a point or spread out.  On gimbols, each Gravity Wave amplifier can operate independently.  The waves are phase shifted, which changes the wave’s orientation and plane from 0 degrees to 180 degrees, thereby changing the attraction or repulsion of the wave.  When a disc operates on only one amplifier, standing on a pedestal of gravity, it is said to operate in an Omicron Configuration.  In this configuration, the other two amplifiers are freed for other uses -- such as picking up cattle.

In the Delta Configuration, discs operate on all three amplifiers.  This configuration is used in space for long-distance travel.  In space, a disc tilts over on its back so that the gravitational amplifiers focus on where the disc is going, and the propulsion system is powered up, amplifying gravitational waves that are out of phase with Earth’s gravity.  The amplified gravitational waves distort space and time or “Space-Time” as it is referred to in the documents.  That gravity distorts or warps space is currently known in mainstream physics.  That is why astronomers, at certain positions during an eclipse, can see stars that are directly behind the sun (the sun’s gravity causes the star’s light to bend around the sun).  That gravity distorts time is also known.  For example, if you and a friend have atomic clocks synchronized to each other and your friend climbs a mountain or goes up in an airplane, the clocks will be out of sync when your friend returns (your clock is in a stronger gravitational field).  In short, the disc warps space-time, attaches itself to the warp and snaps back.  Imagine a thin sheet of rubber stretched out (this represents space).  Now, put a ball bearing on the sheet (this represents the disc).  Now, with your fingers under the sheet, pinch the rubber at a point some distance from the ball bearing.  Keeping the rubber pinched, move the pinch to the ball bearing.  As you bring the pinch back to its original position, the ball bearing will follow.  This is an analogy of what happens.


Of the nine discs, each different, kept in interconnecting hangers, Lazar had hands-on experience with one he dubbed the “Sport Model” because of its sleek appearance.  It was about 52 feet in diameter.  Before he worked on it, he was given a short demonstration of its ascending about 30 feet, moving to the left, then to the right, and then rapidly ascending from there.  Before initially lifting off the ground, the disc briefly gave off a corona discharge, a sound similar to that of high-voltage electricity, and then it was completely silent, its bottom glowing blue.  The hissing and glowing are by-products of the tremendous electromagnetic pulses generated from the craft.  Inside the “Sport Model,” Lazar saw a console and children-sized chairs.  There were no 90 degree angles inside, and everything appeared softly rounded.

According to the documents, the aliens are identified as being from Zeta 2 Reticuli, the second star of a binary system in the Constellation Reticulum.  They come from the fourth planet out.  A day on their planet is about 90 hours long.  Although it is about 37 light-years from Zeta 2 Reticuli to Earth, discs take very little time to cover the distance because discs do not travel in a linear mode.  Speed is defined as distance divided by time.  Since discs operate by warping time itself and space itself, a more complicated formula than “speed equals distance divided by time (s = d/t)” is needed to describe what happens.  It is not so much that discs break Einstein’s famous rule that nothing can travel faster than the speed of light; it’s more accurate that discs get around the rule altogether.  Recall that Einstein died trying to understand gravity.  According to Lazar, gravity propagates instantly.

When traveling at relatively slow speeds near a planet, discs again use gravity, but in a different way.  This time discs balance on gravity waves and “fall” in the direction they want to go.  Gravitational waves from the disc are phase shifted into the planet’s gravity.  Although discs are more unstable in this mode, they can still perform maneuvers that are beyond the capabilities of conventional aircraft -- such as making 90 degree turns on a dime or accelerating rapidly.  Those inside the discs experience no G forces during these maneuvers. 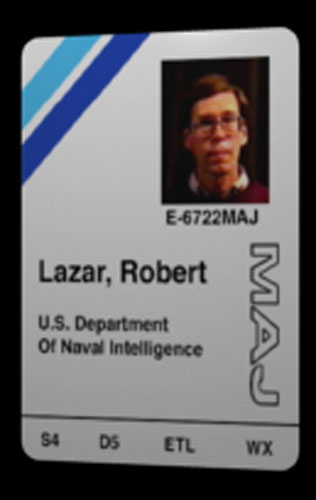 Bob Lazar’s Identification Badge for Access to Work at S4

If you are interested in finding out more about Bob Lazar, UFOs and Alien Technology, and the U.S. Government’s Top Secret Base - Area 51, you can purchase the following books or DVDs from Amazon.com.


If you are interested in streaming UFO Technology related videos from Amazon Prime, click on the folloiwng images.

Index and Direct Hyperlinks to the Other Web Pages on this Website: