Zeta Reticuli (Zeta Ret, ζ Reticuli, ζ Ret) is the Bayer designation for a wide binary star system, Zeta 1 Reticuli and Zeta 2 Reticuli, located in the southern constellation of Reticulum.  Zeta 1 Reticuli and Zeta 2 Reticuli are also special stars because they are two of the relatively few places in the Milky Way Galaxy that may offer terrestrial life conditions.  We already have evidence that this system supports the existence of intelligent life based upon the abduction of Betty and Barney Hill and from information provided by Bob Lazar when he went public regarding his involvement in reverse engineering an extraterrestrial spacecraft at S4 on Nellis Air Force Base in Nevada.

Zeta 1 Reticuli and Zeta 2 Reticuli are only visible from latitudes south of about 25° North Latitude at a distance of 39.5 light-years (12 parsecs) from the Sun.  From the southern hemisphere the pair can be seen as a naked eye double star in very dark skies.  Zeta 2 Reticuli is orbited by a circumstellar debris disk.  Both stars are Solar Analogs that share similar characteristics with the Sun.  They belong to the Zeta Herculis Moving Group of stars that share a common origin.  The two stars are located at similar distances from the Sun and share the same motion through space, confirming that they are gravitationally bound and form a wide binary star system.  They have an angular separation of 309.2 arc seconds (5.2 arc minutes); far enough apart to appear as a close pair of separate stars to the naked eye under suitable viewing conditions.  The distance between the two stars is about 3,750 AU (about 95 times greater than the Sun - Pluto distance), so their orbital period is around 161,000 years.

Zeta 1 Reticuli and Zeta 2 Reticuli share similar physical characteristics to the Sun, so they are considered Solar Analogs.  Their stellar classification is nearly identical to that of the Sun.  Zeta 1 Reticuli has 96% of the Sun’s mass and 84% of the Sun’s radius.  Zeta 2 Reticuli is slightly larger and more luminous than Zeta 1 Reticuli, with 99% of the Sun’s mass and 88% of the Sun’s radius.  The two stars are somewhat deficient in metals, having only 60% of the proportion of elements other than Hydrogen and Helium as compared to the Sun.  For reasons that remain uncertain, they have an anomalously low abundance of Beryllium.  Both stars are considered unusual because they have a lower luminosity than is normal for main sequence stars of their age and surface temperature.  That is, they lie below the Main Sequence curve on the Hertzsprung-Russell diagram for newly formed stars.  Most stars will evolve above this curve as they age.

Once thought to be old Population II, galactic-halo-type subdwarf disk stars, Zeta 1 Reticuli and Zeta 2 Reticuli were believed to be as much as 8 billion years old.  More recent analysis of chromospheric activity and rotation with spectral analysis and calibration with other Sol-type stars suggest that the two stars may be as young as 1.5 to 3 billion years old.  An earlier hypothesis that the stars were relatively dim because of a high abundance of Helium has been refuted recently.  The pair is now thought to be part of the Zeta Herculis stellar moving (kinematic) group of high velocity stars as defined by Olin J. Eggen in 1958, which no longer includes Zeta Herculis itself.  Zeta 1 Reticuli has an intermediate level of magnetic activity in its chromosphere.  The actual age of this system is still in question because of the conflicting information.

On September 20, 1996, a tentative discovery of a hot Jupiter around Zeta 2 Reticuli was reported, but the discovery was quickly retracted as the signal was shown to be caused by pulsations of the star.  The retraction of the discovery of this planet remains suspicious in light of the fact that Zeta 2 Reticuli was the suspected solar system where the Greys come from.  In 2002, Zeta 1 Reticuli was examined at an infrared wavelength of 25 μm, but no indication of an excess of infrared radiation was found.  In 2007, the Spitzer Space Telescope was used to find an infrared excess at a wavelength of 70 μm around Zeta 2 Reticuli.  This radiation is likely being emitted by a debris disk with a mean temperature of 150°K (-123°C) that is orbiting the host star at a distance of 4.3 AU.  In 2010, the Herschel Space Observatory, a telescope with a comparatively superior spatial resolution and, unlike Spitzer, able to resolve radiation excesses beyond the wavelength of 70 μm, determined the infrared excess as coming from a debris disk analogous to the Kuiper belt with a semi-major axis of 100 AU and a temperature of 30°K - 40°K, rather than was previously speculated a debris disk analogous to the Asteroid belt.  Whether a debris disc exists around 4.3 AU or 100 AU indicates a significant possibility of the existence of planets orbiting Zeta 2 Reticuli.

The Zeta Reticuli system belongs to the Zeta Herculis Moving Group of stars that share a common motion through space, suggesting that they have a common origin.  In the galactic coordinate system, the U, V, W components of the space velocity for this system are equal to -70.2, -47.4, +16.4 km/s for Zeta 1 Reticuli and -69.7, -46.4, +16.8 km/s for Zeta 2 Reticuli.  The components of space velocity in the Milky Way’s Galactic coordinate system are usually designated U, V, and W, given in kilometers/second (km/s), with U positive in the direction of the Galactic center, V positive in the direction of Galactic Rotation, and W positive in the direction of the North Galactic Pole.  The peculiar motion of the Sun with respect to the Local Standard of Rest (LSR) is U = 10.00 + 0.36 km/s, V = 5.23 + 0.62 km/s, and W = 7.17 + 0.38 km/s.  Zeta 1 Reticuli and Zeta 2 Reticuli are currently following an orbit through the Milky Way galaxy that has an eccentricity of 0.24.  This orbit will carry the system as close as 17.4 kilo light-years (kly) = 5.33 kiloparsecs (kpc) and as far as 28.6 kly = 8.77 kpc from the Galactic Center.  The inclination of this orbit will carry the stars as much as 1.3 kly = 0.4 kpc from the plane of the galactic disk.  This likely puts them outside the thick disk population of stars which seems to indicate thay may be older stars.

In astronomy, the Local Standard of Rest or LSR follows the mean motion of material in the Milky Way in the neighborhood of the Sun.  The path of this material is not precisely circular.  The Sun follows the Solar Circle (eccentricity e < 0.10) at a speed of about 220 km/s in a clockwise direction when viewed from the Galactic North Pole at a radius of ˜ 8 kpc about the center of the galaxy near Sagittarius A* (Sgr A*), and has only a slight motion, towards the Solar apex, relative to the LSR.  The LSR velocity is anywhere from 202 km/s – 241 km/s.  Sagittarius A* (pronounced “Sagittarius A-star,” standard abbreviation Sgr A*) is a bright and very compact astronomical radio source at the center of the Milky Way Galaxy, near the border of the constellations Sagittarius and Scorpius.  It is part of a larger astronomical feature known as Sagittarius A.  Sagittarius A* is believed to be the location of a supermassive black hole, such as those that are now generally accepted to be at the centers of most spiral and elliptical galaxies.  Observations of the star S2 in orbit around Sagittarius A* have been used to show the presence of, and produce data about, the Milky Way’s central supermassive black hole, and have led to the conclusion that Sagittarius A* is the site of that black hole. 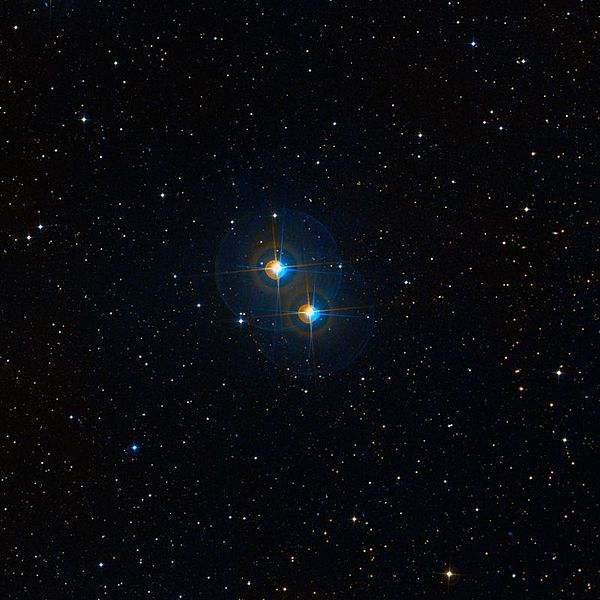 The Zeta Reticuli Star System is also special place, because either Zeta 1 Reticuli or Zeta 2 Reticuli may offer life conditions similar to our Solar System.  A star must pass five tests before we can call it a promising place for terrestrial life as we know it.  Most stars in the Galaxy would fail.  In the case of Zeta 1 Reticuli and Zeta 2 Reticuli, both stars pass all five tests (the age of the two stars is being debated).

The second test is much tougher, however, we want the star to have the right spectral type, because this determines how much energy a star emits.  The hotter stars - those with spectral types O, B, A, and early F - are no good because they burn out fast and die quickly.  The cooler stars - those with spectral types M and late K - may not produce enough energy to sustain life, for instance they may not permit the existance of liquid water on their planets.  Between the stars that are too hot and those that are too cool, we find the stars that are just right.  As our existance proves, yellow G-type stars like the Sun can give rise to life.  Late (cool) F stars and early (hot) K stars may be fine too.  Zeta 1 Reticuli is a G3V to G5V star which is just slightly cooler than our Sun making it very similar.  Zeta 2 Reticuli is a G2V star making it nearly identical to our Sun.  Therefore, both stars pass this test.

For the third test, a system must demonstrate stable conditions.  The star’s brightness must not vary so much that the star would alternately freeze and fry any life that does manage to develop around it.  But because Zeta 1 Reticuli and Zeta 2 Reticuli form a binary pair there’s a further issue.  How much does the light received by the planets of one star vary as the other star revolves around it?  During their estimated 161,000 year orbit, the separation between Zeta 1 Reticuli and Zeta 2 Reticula is about 3,750 AU, which is 95 times the distance between the Sun and Pluto.  As viewed from the planets of one star, the brightness of the other star would be negligible based upon its significant distance.  Therefore, both stars pass this test.

The fourth condition concerns the stars’ ages.  The Sun is about 4.6 billion years old, so on Earth life had enough time to develop.  A star must be old enough to give life a chance to evolve.  The actual result of this test is in question because of conflicting information regarding the age of the two stars.  The stars are either 1.5 to 3 million years old which would be a test failure or are 6 to 8 million years old which would be a passing test depending upon what data is used to estimate the age of the stars.

And the fifth and final test:  Do the stars have enough heavy elements - such as Carbon, Nitrogen, Oxygen and Iron - that biological life needs?nbsp; Like most stars, the Sun is primarily Hydrogen and Helium, but 2% of the Sun’s mass is made up of metals (Astronomers call all elements heavier than Helium “metals”).  Although 2% may not sound a lot, it is enough to build rocky planets and to give rise to us.  For Zeta 1 Reticuli and Zeta 2 Reticuli, this test is somewhat marginal because these stars containe about 60% of the heavy elements found in our Sun – the stars are somewhat metal-deficient.

Index and Direct Hyperlinks to the Other Web Pages on this Website: